Drug "Mediator" means a killer pill sold in Italy in France was withdrawn after causing 500 to 2000 deaths. 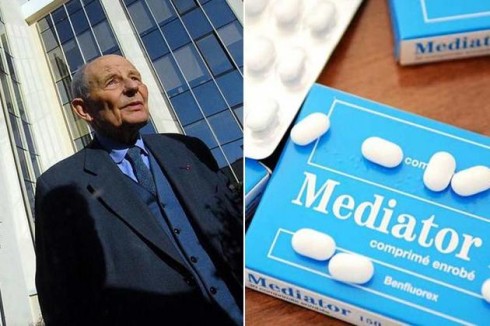 8n important judicial inquiry left Paris is exposing one of the largest pharmaceutical scandals in the old continent in recent years: the prosecution of the French capital has in fact indicted for fraud in health insurance Servier pharmaceuticals on the entrepreneur, owner of the fearsome drug Mediator.
For some time, criminal investigations were two games against the laboratory for "manifestly deliberate manslaughter in violation of an obligation of safety or prudence imposed by laws or regulations and causing unintentional injuries aggravated disability."
The Mediator, for those who do not know, is a drug manufactured by Servier laboratory indicated for the treatment of diabetes and obesity, commonly used as an appetite suppressant, which would have caused death in France alone from 500 to 2,000 people they would have used in the 33 years that has been on the market and particularly from 1976 to 2009, the year of his withdrawal from the market in the country Alps.
In fact, beyond the alleged anti diabetes, which itself proved a potent anorectic dall'anfetamina derived, which has caused, according to some estimates, in 3500 the French permanent damage and do not know how many Europeans see that as long almost half of 2005 was marketed in the rest of Europe.
There has to be specified that in the long-term marketing have evolved also in pharmacovigilance systems, which allowed even in the recent past, many of the withdrawal from the market, changing the therapeutic indications, or added new "warnings" about possible effects side, but the case of the Mediator is the text.
The offending medication is based on an active called benfluorex, which is a derivative function of fenfluramine, which reduces the absorption of fats and hyperglycemia. These functions of the Mediator have stimulated the use in the treatment of obesity and on the basis of studies focused on problems related to diabetes as a "2" has been marketed in Italy until 2003, the date of the withdrawal by the company market maker for the beautiful country, while in Spain it was taken off the market in the same year as a result of allegations of serious cardiovascular side effects: in particular, pulmonary hypertension and valvular disease.
Unlike in France, Servier Laboratories have appeared almost untouchable, so much so that despite the controversy and reports the same has been sold until November 30, 2009.
What is amazing is that the side effects of fenfluramine had been known before 1997 when, in particular, in June of that year, the Food and Drug Administration, the American authority in charge of supervision of medication, first pointed out the adverse reactions of molecule in combination with others: these were 24 patients who had developed valvular disease that was associated with the particular cases of the hiring fen-phen (fenfluramine-phentermine).
On 15 September 1997, the FDA announced the immediate withdrawal of fenfluramine and dexfenfluramine.
It is evident, therefore, that despite these measures by a supervisory authority of such authority, these molecules have been marketed in Europe for more 13 years, perhaps for the strong relationships with the world of politics, in particular trans-Alpine, who had allowed themselves to Jacques Servier to enjoy a high esteem and reputation.
Meanwhile, in July 2009, Jacques Servier, later dubbed by some newspapers as "the entrepreneur of the pill killer" had received the Legion d'Honneur, the highest honor of the French Republic, from the hands of President Nicolas Sarkozy, former attorney the company before becoming Minister of the Interior.
According to some, the plots between the entrepreneur and the political side of the Alps, could in part explain the delay in striking the Mediator has been withdrawn from sale, until the end of 2009.
But John D'Agata, a component of the Department of National Theme "Consumer Protection" of Italy of Values and founder of the "Door of Rights" wonders why Italy has been allowed in the market until 2003, or about six years away strong stance by the FDA, and what may have caused effects on patients who have used up to that year. Perhaps the answers could be given of an investigation by the Ministry of Health to urge that we prepare ourselves through a parliamentary question by the groups of IDV.
In the meantime, any citizen who can give us his personal testimony about the alleged effects on the use of the drug also can contact the "Door of Rights" to the addresses found on the site www.sportellodeidiritti.org